Nigeria’s 2011 Elections – Keeping the 2 R’s in Mind: Resilience and Resolve

Do Not Underestimate Nigerian Resilience and Resolve

As Nigeria continues on the path to its critical elections which appears to be slated for April 2011, there are two key things to keep in mind which I call the two R’s: Nigeria’s Resilience and Nigeria’s Resolve. Do not underestimate either. Having just finished up my 3 year tenure there as the U.S. Ambassador to Nigeria (2007-2010), I have always marveled at these two elements which are fundamental to Nigeria's national character. These two elements will also pay a role in the conduct of how Nigeria’s 2011 elections will unfold. Yes, things are heating up in Nigeria’s election landscape and yes there is still a long way to go in ensuring voter registration, political party transparency, and a secure enabling environment for a credible election. But make no mistake – today more than ever Nigerians want a fraud-free election conducted in a secure environment. No one (and this includes Nigerians) underestimates the challenges ahead to get everything done on time, and keeping everything on track. But, what I would argue is important from this point forward until the proposed April 2011 election is working WITH Nigeria and Nigerians to makes this election as successful as possible, not criticizing it this far out from the sidelines – every friend and every partner of Nigeria should be working in lockstep in that direction.
Let’s keep in mind this phrase (one I have always thought about over the last couple of months in Nigeria before the end of my tenure) -- “What a Difference a Year Makes.” With a quick trip down memory lane, last year this time (the Sept-Dec 2009 time period) when many outside of Nigeria were worried about destabilization of the country, many Nigerians in-country (not necessarily all) were confident that the days of military intervention were over. This resolve was inspite of things being very politically murky as worries about the late President Yar’Adua’s illness overtook the nation. There was a sense not only that the country would get through this difficult time (and it did!), but also a strong desire not to repeat history, but continued efforts to try to build a better electoral process. Resilience and Resolve prevailed during this period and we need to continue to call on Nigeria to depend on these two elements of its national character as it moves toward its 2011 election. There is not a Nigerian that does not understand getting this election process right will not only be tough as there is a lot to do in a short amount of time (see The Africa Post August 2010 @blogitrrs). But this is where friends are supposed to come in and do their utmost to support the right actions.
Friends of Nigeria from this point forward should be helping Nigeria get to credible elections. There is a way of doing things in Nigeria that is not always clear from the outside, and no doubt there will be ups and downs until the 2011 election is executed. Things will look uncertain from time to time, and be of concern, but every single step or misstep does not mean a doomsday scenario is unfolding. We need to continue to encourage Nigeria to:
• Support and involve civil society at every turn in the election process;
• Support an active and free press;
• Support parallel vote tabulation or swift vote count by civil society;
• Support all efforts which will promote a violent-free election;
• Support election monitoring by both civil society and international observers; and,
• Support efforts to encourage political parties to have true internal democratization.
Consider the above My “Checklist for Nigeria’s 2011 Election.” I was a Nigeria optimist when I was there as U.S. Ambassador and I will remain one. This does not mean that I will not encourage Nigeria – as a friend and daughter of the Continent – to do things that I hope will continue to build its democracy or state when there are things of concern. This is what friends do, but they do it fairly, forthrightly and with a long term positive goal in mind, but always with mutual respect to this nation of 150 million people. I have a democracy wish list for Nigeria @50 as it reaches its jubilee independence anniversary on October 1, 2010 and outlined clearly the challenges ahead in several speeches (see the Africa Post @ http://blogitrrs.blogspot.com/2010/08/remarks-on-july-291-2010-my-wish-for.html, & http://blogitrrs.blogspot.com/2010/06/dr-robin-r-sanders-remarks-at-vice.html), and my “Checklist for Nigeria’s 2011 Election” above is nothing new. It is what the Chairman of the Nigerian Independent Electoral Commission (INEC), Dr. Jega, Nigerian civil society, and the Nigerian people, who want a clean election, have on their radar screens to try not only to turn the tide of how INEC is viewed, but rebuild the confidence of so many Nigerians in their electoral process. Let’s all work toward supporting Nigeria in achieving these things.
(views on blog from Sept 26, 2010 onward are personal and do not represent the positions of U.S. Government or Africare.)
Posted by Dr. Robin R. Sanders at 3:57 AM

This email is UNCLASSIFIED. 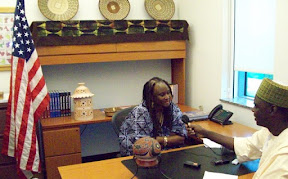