In addition to being featured in the prestigious national magazine Publishers Weekly, highlighted as a "quality business book by Top Link Publishers," recognized by diplomatic peer reviewers by the Association for Diplomatic Studies & Training (ADST) and the American Foreign Service Association (AFSA) for quality books by former U.S. Diplomats, the book has been coverer by the following quality media outlets from New York and London to Tokyo, and Shanghai. It was also featured in the African Union News. Its new e-book format (with clickable links for all 500+ footnotes & references) was also features in the leading national e-book magazine "BookMad."

Chicago Board of Trade News Today


A FEEEDS Blogspot
Posted by Dr. Robin R. Sanders at 7:21 AM 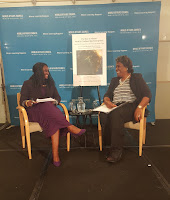 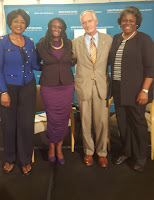 The two hour World Affairs Council (WAC)"Author Series" program on the impact of Africa's small businesses (better known as SMEs) on development and growing the region's middle class featured the immediate past United States Assistant Secretary of State for Africa, Ambassador Linda Thomas Greenfield, and Ambassador Robin Renee Sanders with the latter book, "The Rise of Africa's Small and Medium Size Enterprises," being the featured book for the WAC November, 2017 program. The program was opened by the WAC of Washington, D.C. President Anthony R. Culley-Foster, and the Honorable Ambassador to the African Union, Arikana Chihombori Quao, was not only in attendance, but shared comments with the audience on the importance of Africans and Africans in the Diaspora not forgetting the devastating impact of the history of the Continent from the Berlin Conference of 1800s to today which has affected the development of the   region,  adding that Africans and Africans in the Diaspora must be  united as one voice. #AfricaSMEs. Sanders's book can be found at: http://ambassadorrobinreneesanders.com/RobinSandersNewAfricaSMEBook.html 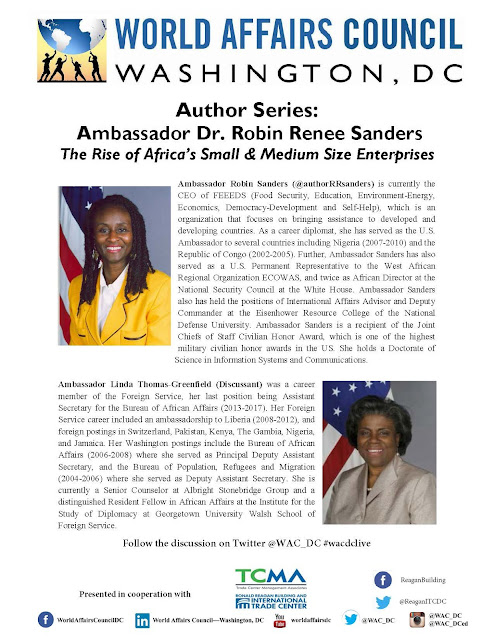 Washington, D.C. October 10, 2017 – Ambassador (Dr.)  Robin Renee Sanders’ new book on “The Rise of Africa’s Small & Medium Size Enterprises” (SMEs) is an insightful examination of the dramatic shift in the development paradigm for Sub Saharan Africa – driven in large part by the imaginative, innovative and insta-impact leadership of many of the region’s small businesses or SMEs. “SMEs have helped drive economic growth and aided in increasing the size of the Continent’s middle class,” Sanders says. The book will be featured in the prestigious Publisher's Weekly Magazine’s October 2017 issue, and was cited and ranked high by Top Link Publishers for its " analysis and research as a quality book on business development." The book's Introduction is by renowned civil rights leader, former United Nations Ambassador, and entrepreneur supporter Ambassador Andrew Young, and the Foreword is by Africa’s leading businessman, Mr. Aliko Dangote, who himself began his fortune by starting off as a young entrepreneur and remains an advocate for the sector. Former President George W. Bush upon receiving the book, noted its "thoughtfulness" and also thanked Sanders for her continued "work to improve lives" in the region.  Dr. Sanders worked for Presidents Clinton, Bush, and Obama during what she described as the paradigm shift-change years of U.S. policy toward a more positive, partnership-based relationship with Africa; she also shares some related diplomatic vignettes in the book from those years, and has done a TEDxTalk on impact of Africa’s SMEs, https://youtu.be/fk-BONoNz9U.

About the Book: Ambassador Sanders says the core of the book's message is about development and the key role that Africa small businesses have and are playing and they are one of the keys to the region's forward progress on job creation, trade, manufacturing, and expanding the middle class. Sanders’ credits the determination of Africa’s SMEs to step into the void left by 40 years of post-independence development efforts that had little impact on overall poverty reduction and job creation. Sanders' perspective is that donors took note of the efforts of African Generation Xers and Millennials and also stepped up significantly to expand support and training to Africa's SMEs. The book also has recommendations on what more donors, the African Union, African Governments, the United Nations, and the new U.S. Administration can do to further assist Africa SMEs. There is also an extensive chapter discussion on China – called the China Factor - on what it is doing in the Africa SME sector, such as the big pluses like special economic zones, the potential role of the New Development Bank, how China can help even more as the world’s current net credit lending country, as well as point out some things on which it needs to do better. Other key chapters address the positives and challenges remaining in the region on the democracy front for many countries; for Africa SME women, particularly the gap in their access to financing, and the need to train more young girls in STEM fields; and, the need to introduce more and more of the Continent's young people to entrepreneurship. The 530-page heavily-researched book (with 500+ footnotes and references), includes DataGraphs by the prestigious Gallup World Poll, which partners with Ambassador Sanders, along with Allafrica.com, on holding key annual events on Africa issues. These DataGraphs help underscore the key issues and points in the book on the role and importance of Africa's SMEs in moving the region forward.  The book is available on Amazon.com, or for signed copies from Ambassador Sanders order from: http://ambassadorrobinreneesanders.com/RobinSandersNewAfricaSMEBook.html

Author’s Bio Note: Ambassador Sanders served as one of the U.S. Government’s top diplomats on Africa over an extensive career in the United States Diplomatic Corps with senior positions ranging from Ambassador to the Republics of Nigeria and the Congo, two stints as Director for Africa at the White House, and the U.S. Permanent Representative to the West African Regional Organization ECOWAS. Dr. Sanders received her doctorate degree from Pittsburgh’s Robert Morris University in information systems and communications and is known as a thought-leader on Africa’s national security to its development, political and economic issues. She has a particular focus on the SMEs, and the UN Sustainable Development Goals (SDGs,) the global international consensus document to combat poverty issues. She has testified before the U.S. Congress on many of these topics. Sanders is the recipient of the U.S. military’s joint Chiefs of Staff Award, the highest U.S. military honor given to a civilian; serves on the U.S. Trade Representative Africa Advisory Committees; is a member of the prestigious Academy of Diplomacy of former senior U.S. Government officials; is the recipient of the Presidential Medal of Honor from Congo; and has six Department of State Awards (Superior and Meritorious). Sanders also is a Distinguished Public Service Scholar at RMU, has two Master’s Degrees (International Relations-African Studies and Communications) from Ohio University, and is a Visiting Scholar under the CIC Woodrow Wilson Program. Her first book, The Legendary Uli Women of Nigeria, www.bit.ly/UliBook-SummaryPhotos, is also available on amazon.com. 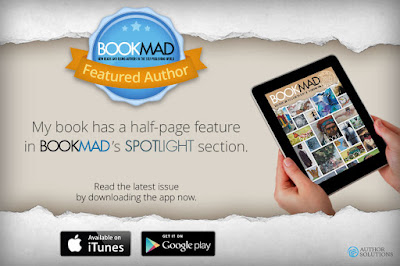 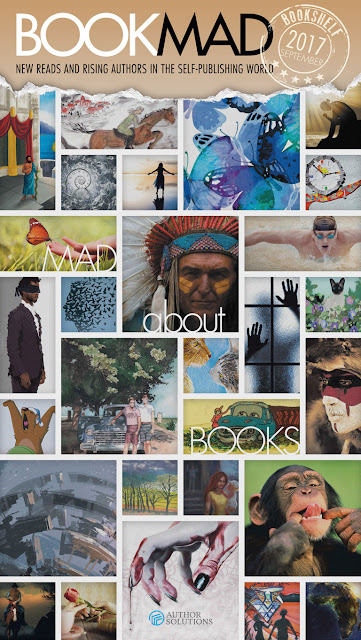 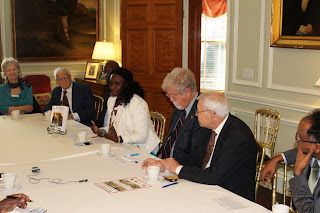 Ambassador Sanders continues her efforts to raise the important role Africa small businesses, better know as Africa small and medium size enterprises. She will be a featured guest at Washington's D.C. prestigious 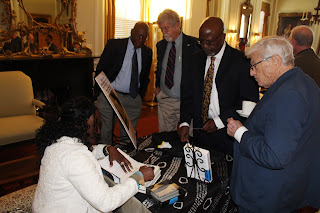 organization of foreign affairs professionals, and was founded in 1952. Its purpose and goal is to continue to "foster interest in foreign affairs and to build mutual international understanding between the people of the United States and those from around the world." In addition its helps to support and encourage young Americans to enter the U.S. Foreign Service (U.S. Diplomatic Corps) and supports those already in the Service. DACOR Bacon House is located two blocks from the White House. See http://www.dacorbacon.org/ for more information 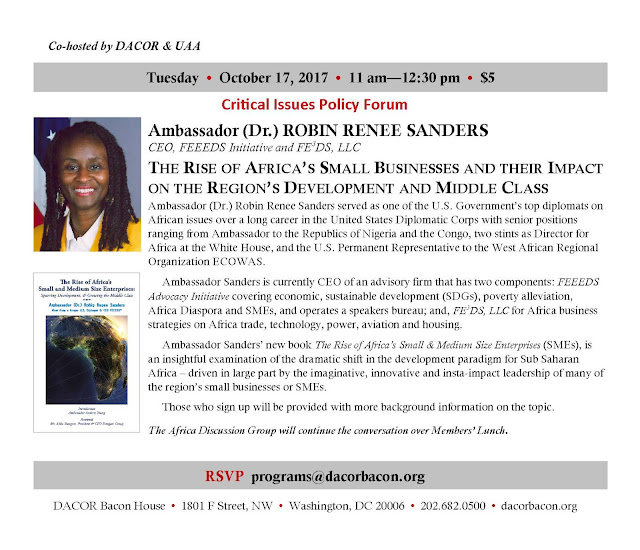 Ambassador Robin Sanders will be speaking at Robert Morris University (RMU) in Pittsburgh on the great example Africa's small and medium size businesses (SMEs) are providing for those in both the developed and developing world to see entrepreneurship as a way not only to address personal economic growth, but help communities and the greater global society in what she calls their  "businesses-aiding-development" role  in her latest book, "The Rise of Africa Small and Medium Size Enterprises: Spurring Development & Growing the Middle Class." 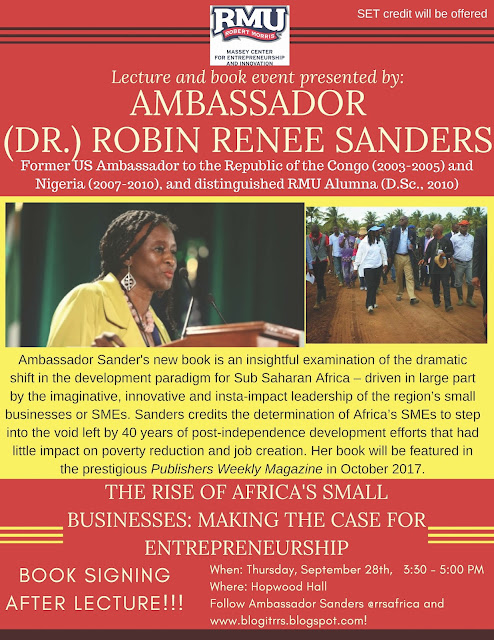 Ambassador Sanders presents at TEDxTALK Emory on the Key Role Africa's Small & Medium Size Enterprises are playing in advancing the development of the Sub Saharan Africa Region and their role in growing Africa's Middle Class - presentation highlights this "good news story" about the region. Click Below to see Sanders TEDxTALK on the subject:

A FEEEDS Blogpost
Posted by Dr. Robin R. Sanders at 2:48 AM

﻿﻿﻿﻿﻿﻿﻿﻿﻿﻿While development is ultimately the responsibility of each sovereign country, small and medium size enterprises (more commonly referred to as SMEs) within Sub-Saharan Africa are providing what Sanders calls creative business-aiding-development enterprises that are defining the region’s future and responding to its many age-old challenges with both new and appropriate (repurposing by-products of paper or plastic) technology solutions, according to Ambassador Robin Renee Sanders. Ambassador Sanders, a former top U.S. government diplomat who served as U.S. Permanent Representative to the West African Regional Organization ECOWAS, and Ambassadors to Nigeria and Republic of Congo, spoke at the Washington, D.C. area launch of her new book on May 11, 2017.  The book titled “The Rise of Africa’s Small & Medium Size Enterprise; Spurring Development & Growing the Middle Class,” highlights the role small businesses are playing in not only aiding development but adding to the economic growth of the Sub Saharan Africa Region. The Washington, D.C. book launch was hosted by Gallup World Poll, with Allafrica.com as the event’s media partner. Sanders, who is CEO of FEEEDS, along with Gallup World Poll and Allafrica.com have partnered annually to cover key events on Africa over the last several years from policies to elections, to improvement in governance.


In his opening remarks, Gallup World Poll Managing Partner Jon Clifton said, “The Africa small business story is one of the good news stories, and Gallup World Poll data helps to tell this good news story.”  Clifton commented that in Ambassador Sanders’s book there are a number Gallup World Poll Datagraphs that helped add to sharing this all-important story of the roll today that Africa’s SMEs are playing, even in, or in spite of difficult or post-conflict environments in some cases.


“The Rise of Africa’s Small & Medium Size Enterprises” discusses the determination of Africa’s SMEs to step into the void left by 40 years of post-independence development efforts that left very little impact on overall poverty reduction and job creation in the region. Some of the key chapters include a focus on recommendations on what donors, the African Union, African governments, and the new U.S. Administration can do to further assist Africa SMEs.  The book also sheds light on the “China Factor” in the region and its efforts in the SME sector; serves as a resource-rich data source of not only what Africa’s SMEs are doing, but shares investment, foundation, and competition opportunities that Africa’s SMEs can take advantage of, and extensively covers what SSAfrica’s female entrepreneurs are achieving as well as they special challenges they face.  Other areas covered by the book include: special programs by the various African stock exchanges (e.g. Johannesburg, Kenya, Nigerian) for Africa’s SMEs, which helps them better understand as well as access the capital markets, the new role that other technology creative-use boosters such as 3-D printing and drones are adding to the mix of small business opportunities; and, Sanders highlights the top eight list or her TEL list of sectors where Africa SMEs are playing and could play more of role in economic development.


A FEEEDS Blogspot
Posted by Dr. Robin R. Sanders at 2:57 AM