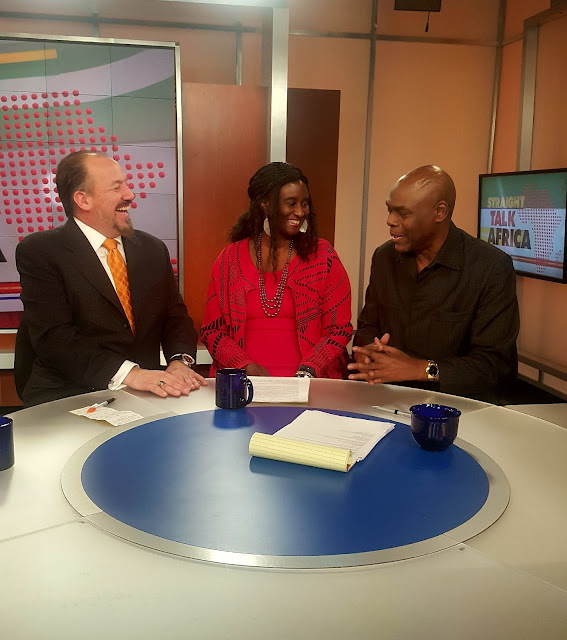 Sanders with VOA Straight Talk Host, Shaka Ssali, and the program's other guest Joe Szlavik following the show on current US-Africa policy and looking back at President's Trump's first year in office
A FEEEDS Blogspot﻿

Dr. Sanders appeared on Al Jazeera English, @AJEnglish to discuss US-Africa policy in light of recent reported derogatory comments by the White House about the world's most resource rich, strategic, engaged and dynamic public, and on route to being the most populous region in the world -- Africa. Click here to see video:  Africa Must be Important to the US, says Sanders 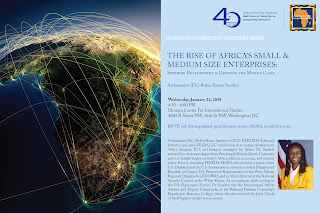 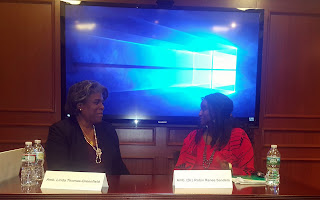 As part of its prestigious series "Distinguish Practitioners Series," at its Institute for the Study of Diplomacy (ISD) , Ambassador Robin Renee Sanders has been invited to speak at its first 2018 program to discuss not only her recent book, "The Rise of Africa's Small and Medium Size Enterprises, "but also to dialogue about current US-Africa policy and what place Africa has in U.S. public policy today as we reach the end of the first year of the Trump Administration. The invitation to speak at the event was extended by former U.S. Assistant Secretary of State, Ambassador Linda Thomas Greenfield, who
is currently the Institute's distinguished  Africa
Studies Fellow and also moderated the event.


The article at the link below appeared in the well-known and respected Allafrica.com on January 17, 2018 in response to the reported recent comments on Africa from the White House. Ambassador Robin Renee Sanders, CEO-FEEEDS joins 77 other colleagues in expressing views on the reported comments about Africa :

Letter to President Trump from Former U.S. Ambassadors to Africa
Posted by Dr. Robin R. Sanders at 4:16 AM

I have never written a first person blog since I started this blog back in 2009, but feel compelled today as a followed up to my tweet on the same subject (derogatory comments about African, Haiti, etc., basically countries of color) several days ago where I said "I stand by the comments by the African Union; President/Governments of Ghana, Namibia, and now Botswana (am sure others countries will follow) against the reported derogatory comments made from the White House about Africa - this vibrant, rich, bastion of humanity, historic Continent filled with wonderful people and places. I love the Continent of Africa and as a result, and have been shocked and dismayed by the reported recent comments. Africa has been my home for years as I worked and represented the American people and the United States of America as have so many other dedicated, hard working American diplomats, military, U.S. private sector personnel, NGOs and civil society colleagues as well as the average American tourist or expatriate who has lived in the region. In this view, I along with numerous other former U.S. colleagues have expressed their shock via a written letter about the reported characterization of the Continent and other countries of color by the White House. This is not the American way, and cannot become the American way!


Reaction continues to filter in from around the world on this issue, and African Ambassadors assigned to the United States are convening here in Washington to determine their next steps as noted in their statement: www.bit.ly/AfricanAmbassadorsinUS. The recent statements attributed to the President represent a sad day for values of America's democracy, but they are also a test of our democracy, which I believe will and must prevail. We as a country must remain committed to the values that have made us the beacon of light for so many in the world. We must continue to be that beacon!