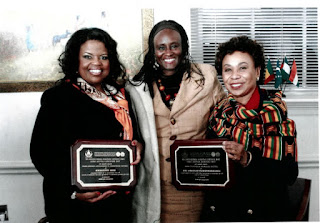 Welcome to this joint United Nations Association of the Capital Area (UNA-NC) -Africare Event. On behalf of Africare’s President Darius Mans, myself – the international affairs advisor, and Dr. Cynthia Carter, Chief Development Officer it is a pleasure to have you at Africare House. Africare would like to thank the United Nations Association of the National Capital Area, its president, Karen Mulhauser, and all of its members who dedicate their time and effort in advocacy for and educating about the United Nations and for its leadership in bringing all of us together this evening for this wonderful 2012 Black History event.

Let me just say a few words about Africare, although most of you are friends and know our dedication and history, but it is especially noteworthy during this Month – Black History Month (BHM) – which highlights the history of a people and provides a national platform for all of us to showcase what African-Americans continue to contribute to this great land of America, and our national fabric. You know Martin Luther King, Jr. talked about the “mutuality of inclusivity” – meaning that we are all connected, interdependent, and to use a techno phrase of today link-in®, to each other as people, as nations, and as organizations.

The UNA-CA and Africare share these same elements in common. Africare has dedicated 41 years in support of the people of Africa through it various programs in agriculture, health, water and sanitation with a specific focus on women and women’s leadership, the later point – women’s leadership - brings us to the theme of our program today. This evening we will honor two-dynamic, dedicated, and demonstrative women leaders, who are also both advocates, and trailblazers – the Honorable Congresswoman Barbara Lee of the 9th District of California, and Ms. Rosa Whitaker, CEO and President of the Whitaker Group, who has been a dear friend of mine for many years.

In this 86th year of celebrating the contributions of African Americans -- as this seminal activity began in 1926 as Negro History Week, and was changed to Black History Month in 1976 -- it gives both the UNA-CA and Africare the great pleasure to recognize two incredible African-American women leaders who are both symbolic and illustrative of the sentiments of BHM month – which calls for us to “honor the accomplishments of Black Americans in every endeavor [of life] throughout our history,” and I would add in our present.

This evening’s program begins with a welcome by UNA-CA President Karen Mulhauser & Africare’s own Dr. Cynthia Carter. Their remarks will be followed by an MLK Tribute by Howard Professor Dr. Anita Nahal, then presentations to our honorees, a befitting musical tribute by Ms. Loide Jorge, and closing remarks and vote of thanks respectively by Recardo Gibson and Abioye Oyewole.

Graduate students earning master’s degrees and doctorates last month got an opportunity to broaden their global perspective, thanks to a commencement address from one of their own, ROBIN RENEE SANDERS D‘10.

The career diplomat and former ambassador to both Nigeria and the Republic of the Congo is currently on loan from the U.S. State Department, working as the international relations advisor and communication and outreach director for Africare, a nonprofit organization that focuses on the issues of food security, agriculture, health, education, and women’s empowerment on the continent.

We asked Sanders, a new member of the RMU Board of Trustees, to share some of her global perspective with readers.

WHAT DID YOU DO YOUR DOCTORAL THESIS ON AT RMU?
How various artifacts and cultural signs and symbols are used to communicate political and social issues about a particular culture.

HOW HAS YOUR RMU EDUCATION BENEFITTED YOU?
I came to Africare as its international relations advisor, but given my extensive academic experience in communications and information systems, they have asked me to also serve as their communication and outreach director. I could not have done that without the benefit of the doctorate from RMU.

I HEAR YOU SPEAK FRENCH, AS WELL AS SOME SPANISH, PORTUGUESE, AND ARABIC. HOW DID YOU COME TO BE MULTI-LINGUAL?
I studied these languages as part of my training as a diplomat.

LOOKING BACK ON YOUR CHILDHOOD, WHAT DID YOU WANT TO BE WHEN YOU GREW UP?
Anything that I have become today or that I have done today is a reflection of the commitment to public service my parents taught me as a kid growing up in a military family. I learned to respect other people and their cultures as a part of living abroad with my family. The best part of anyone’s life is what they can contribute to society to help the next generation, and my time in the U.S. diplomatic corps has allowed me to do this, particularly in Africa.

WHAT ADVICE WOULD YOU GIVE TO TODAY’S STUDENTS?
Live your passion and choose a career that will let you do that. I never saw my job as work, but rather as my passion.

WHAT DO YOU LIKE TO DO IN YOUR FREE TIME?
I am avid about sports and I like to not only watch sporting events, but I also try to keep active myself (squash, golf, dance, etc.). In fact the U.S. Embassy Congo-Brazzaville soccer club is named after me; the team is called "Les Sanders."

WHAT WOULD PEOPLE BE SURPRISED TO KNOW ABOUT YOU?
That I love certain cartoons, particularly the old and new creative ones that have a message as part of the show. I really like “Kim Possible,” “The Wild Thornberries,” and “American Dragon,” and some of the olders ones like “Tom & Jerry.” I also love the arts and almost any cultural activity.

WHAT TYPE OF MUSIC DO YOU LISTEN TO?
Jazz mostly. One of my favorite artists today is Asha, a fantastic Nigerian singer. The other is a cultural artist, Chief Nike Okundaye. In all my travels and in my fascination with the arts, she is one of the most profound and talented artists I have ever met.

HAS ANYONE EVER HAD A POSITIVE, LIFE-CHANGING EFFECT ON YOU?
Lots of people…and I always thank them for coming into my life, including President Dell’Omo and Dr. Fred Kohun, who encouraged me to graduate and also get my doctorate at RMU. In general, though, I give all accolades to my parents, as they have always been my biggest fans and supporters along with my two sisters and my aunt.

For me, life is about concentric circles, instead of just one circle. And I have been fortunate enough to have many circles of really good friends that have all contributed to my life in some way, as I hope that I have done in theirs.
Posted by Dr. Robin R. Sanders at 10:47 PM