Ambassador Sanders wraps up her Rooney Scholar 2019 six month stint at Robert Morris University (RMU) with a major keynote speech entitled "Why Africa Should Be Important to the United States," at the Pittsburgh's World Affairs Council luncheon at the famed and iconic Omni William Penn Hotel. The packed room received the perspective and real world examples from Sanders' extensive diplomatic and business experiences in Sub-Saharan Africa. 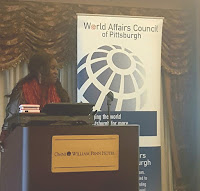 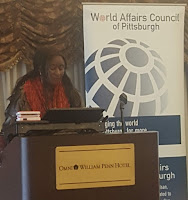 Dr. Sanders laid out the US National Security reasons for more sustained engagement in the region such as security and trade, but underscored the need for more direct contact with African presidents and leaders on a regular basis, along lines of holding comprehensive heads of state level meetings at least once a year or biannually -- similar to what China, and now Russia does (the later held its first Africa heads of state meeting in Sochi this past October 2019). In addition Sanders outlined both Sub-Saharan Africa's (SSAfrica) positives as well as the challenges that remain in key development sectors from agriculture to manufacturing to infrastructure. She also discussed further what she calls the "China Factor," in Africa, providing her take on what sectors as well as what approaches are ready made for U.S. intervention and where the U.S. value-added can be better such as improved and fairer business, trade, training, negotiation and training practices -- avoiding many of the debt-driven deals currently plaguing many SSAfrica nations, where key land and/or single major commodity countries are driven back into the old debt burdens of the 1960s-early 2000s. (Sanders herself work on the Africa debt burden issue for many years in the mid-2000s). It took decades for most African countries to overcome these historic debt burdens, and many still suffer the consequences as they struggle with social and economic reform or seek to achieve or maintain global best practices on "debt-to-GDP" (gross domestic product) ratios. The Ambassador also called on the U.S. to begin now to help the region in these areas as its rolls out and stands up the landmark Africa Continental Free Trade Agreement (ACFTA), which will make the Region's  one of the world's largest trading bloc with an estimated  $3 trillion value. Dr. Sanders also talk extensively as an advocate for Africa's small and medium size businesses (referred to in the Africa Region as SMEs). The event was followed by a book signing of Sanders' second book "The Rise of Africa's Small and Medium Size Business," which has been well-received in the field for its meshing of both policy and practice. The Pittsburgh World Affairs Council book signing for Sanders, the 35th event for the book, followed the keynote. 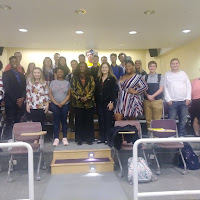 Sanders other keynote lectures included a Davos-style lecture of the various SSAfrican cultures that the Ambassador has worked with or lived with over her diplomatic and advocacy work in the region, stressing the importance of one of her signature messages "understanding human cultural communications," and given her expertise in information systems and communications lecturing on the impact of the Fourth Industrial Revolution on the "Future of Work," in general (from AR-VR-IOBs-IOTs)*,  and in particular how young entrepreneurs and development sector advocates in SSAfrica are using technology to help address many of the Region's development issues in areas from infrastructure to manufacturing to agriculture. ﻿﻿

Other subjects taught to RMU's undergraduates, graduate and doctoral students by Sanders while serving as the Rooney Scholar included topics as far ranging as the United Nations Sustainable Development Goals (SDGs) on Health, Education, and Food Security (as Sanders', as CEO-FEEEDS, is a major advocate of the SGDs); Africa & Technology; Global Writing for journalism students; Technology & Security in the Developing World; A Political Scientist View of World Challenges, Intercultural Communication, Cultural Intelligence -- to name few -- along with participating in panels on careers for women's leadership, public policy, and the challenge of electricity in Africa -- Guinea as a case study. The Rooney Scholar program is a result of the generous support and commitment of the Rooney Family to global learning, where Global Scholars such as Ambassador Sanders, share their scholarly academic and practical experiences with the students of RMU.