Office of the Spokesperson
For Immediate Release
STATEMENT BY MARK TONER, DEPUTY SPOKESPERSON
August 28, 2015
Death of Nigeria’s Ambassador to the United States
We were saddened to learn of the passing yesterday of Nigeria’s Ambassador to the United States, the Honorable Adebowale Ibidapo Adefuye.  Nigeria lost a distinguished ambassador who will be dearly missed.  On behalf of the people of the United States and President Obama, we express our deepest condolences to his wife and his family.
Over the past five years under Ambassador Adefuye’s leadership, we enjoyed a collaborative and open dialogue that yielded real results such as  the U.S.-Nigeria Bi-National Commission, a strategic dialogue that succeeded in expanding mutual cooperation across a broad range of shared interests.  Ambassador Adefuye helped build the Commission into a collaborative forum that has resulted in progress on issues critical to Nigeria’s and the United States’ shared future.
A former Fulbright scholar and participant of the International Visitor Exchange Program, Ambassador Adefuye had a keen understanding of the United States and developed strong relationships with his American colleagues.  His last major assignment as Ambassador was to receive President Muhammadu Buhari and his delegation during the president’s official visit to the United States in July, during which President Buhari met with President Obama and other senior U.S. officials.  The success of this visit speaks to Ambassador Adefuye’s skill as a diplomat.  His tenure helped significantly strengthen the U.S.-Nigerian partnership.
Posted by Dr. Robin R. Sanders at 3:14 AM 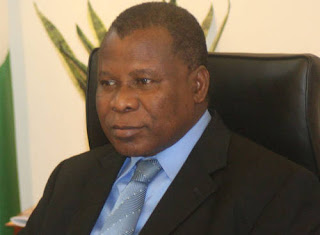 It is with shock and sadness that I heard of the passing of the Honorable Ambassador Adebowale Ibidapo Adefuye earlier today (August 27, 2015), particularly since I had communicated with him on the evening of August 26.  He was well-respected throughout the United States, and particularly here in Washington D.C. for being a dynamic representative of his beloved nation -- The Federal Republic of Nigeria.

All of us who work on African and Nigerian issues here in the U.S. and in particular on Nigeria are still reeling from his sudden passing. He was known for his energy, effectiveness, and efforts to build long lasting bridges to ensure a strong U.S.-Nigeria bilateral relationship. He was a savvy diplomat on both US-Nigeria private sector and government-to-government issues. To that end, the current positive bilateral relationship building between our two nations today is in large measure due to his commitment and hard work. Americans considered him a friend of our nation, and as such, we, and myself in particular, send our heartfelt sympathies to his lovely wife and his children whom he loved deeply; to the entire Embassy staff; and, to the nation of Nigeria.  As his soul rests in peace with the ancestors may that provide some solace and peace to his beloved family at this most difficult time.  Sincerely Ambassador Robin Renee Sanders, CEO FEEEDS Advocacy Initiative, former U.S. Ambassador to Nigeria
Posted by Dr. Robin R. Sanders at 3:45 AM