On February 25, U.S. Mission Nigeria hosted its National Day in Abuja to a crowd of nearly 700 people, with the U.S. Navy Band playing and the wonderful Nigerian singer Age Bika. The crowd was wowed by their performances, and guest were treated to food from all across America. My speech focused on the uncertain political times in Nigeria with the return of the ailing President, a kind and thoughtful person. The USG wishes him well and counts on Nigerian leaders to do the utmost to stay on democracy's path. Key attendees were the Secretary of the Federal Government and the new Attorney General of the Republic. (see photo album) 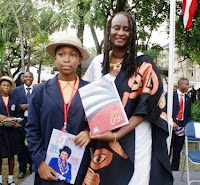 On February 28, the Consulate General in Lagos did its National Day celebrations under the direction of the Consul General. I attended as well to greet and take photos with our wonderful company sponsors who always support our national day activities. There were about 750 guest at this event and the talented young men and women from the Lagos American International School played as fire works hovered over the water. My brief remarks here also focused on keeping Nigeria's democracy on the right path.
On February 22, Had pleasure today to sign a $162,000 USG Grant, along with the USAID Mission Director by which the USG will assist Nigeria Nigeria in one of its principal development goals of obtaining 10,000 megawatts of electricity by the end of 2011. The USG will work with Independent Power Producers Association on this key programs that will also include USG efforts on climate change to help identify renewable energy, reduce gas flarings -- important issues to reduce carbon foot print.
On February 21, The Formers Did A Great! Job: Bush and Rice at This Day Awards. Former President Bush and Former Secretary of State Rice showcased statesperson-ship when they discussed leadership, Nigeria's place in Africa and the world, noting Nigeria must move forward on its democracy. Highlight was a talk-around with Bush and former UK PM Blair moderated by former SecState Rice on the actions during their tenure, the importance of Africa, their love for the continent, and their legacies of development, debt relief, and combating AIDS. Rice gave frank talk at evening event to a gala crowd of 1000 on the impact of her history on who she is today, and her good wishes for Nigeria as it charts the way ahead. Having served as Ambassador to Republic of Congo under both, they included me in their meeting with the newly names Acting President of Nigeria. Key points sometimes circumstances make great leaders, rise to the occasion with transparent 2011 elections, fighting corruption, and good governance. (see photo in album)

On March 2, I had the wonderful opportunity to meet with nearly 100 farmers involved in a cassava cooperative and a local factory that changes cassava to glucose. The USG provides technical assistance to the Ekha Agro Factory whose managing director is a dynamic young woman. This is the first factory of its kind in Nigeria, and the first in West Africa! With USG technical assistance, we have been able to help 1000 local farmers in 3 states -- Ogun, Oyo, and Lagos -- increasing their yields and their incomes. This project is both income-generating and helps build a sense of community and cooperation among the farmers, as they all work together on each other's crops in support of greater yields, which means more income. Farmers First!!
On March 3, I had another active day raising the profile of the USG in the agricultural sector. I spoke with a number of small and medium size entrepreneurs at the launching of the USG's Nigerian Expanded Export Promotion Project or NEEP which is through USAID and the West Africa Trade Hub. NEEP will train small business persons to identify their markets in the U.S. and in the West Africa region in order to export their products, and help them improve the quality of their products, particularly in shea butter and textiles. The goal is to have their products reach export-quality levels or increase their outputs. Nearly 100 small business persons attended the NEEP launch and were beneficiaries of the first training event. I learned there was a U.S. Shea Butter Institute in Atlanta - who knew! (see photo in album)
Posted by Dr. Robin R. Sanders at 3:24 PM