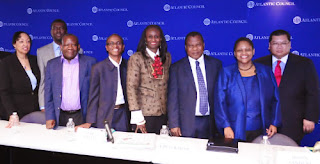 WASHINGTON, DC, Wednesday, April 20, 2011 – On April 19, Africare, in partnership with the Atlantic Council and Carnegie Mellon University’s Center for International Policy and Innovation (CIPI), organized a forum that focused on the “ Initial Assessment of Nigeria’s 2011 Election.” Most of the panelists were in Nigeria during the recent elections and gave firsthand accounts of what they saw on the ground. Many of the Forum’s presenters were in agreement that these latest elections – both parliamentary and presidential, held April 9th and April 16th respectively – were the most credible and well-organized national elections Nigeria has ever seen since the onset of its democratic experience (the country was ruled by military dictators for 30 years and made moves to establish democratic principles 11 years ago). Most panelists were optimistic about the future of Nigerian elections and noted that the problems identified during the elections could be worked on and did not affect the outcome of the elections.
On the other hand, Mr. Nasir El-Rufai, a prominent Nigerian political figure and former Nigerian Minister of the Federal Capital Territory, cautioned attendees about the dangers of too much self-congratulatory statements, given that there was not only a geographic split in the country in support for the two candidates (most of the North voted for opposition candidate General Buhari), but also that many in the country’s northern region felt that their votes were not reflected in the outcomes of the vote count. El-Rufai did add that the 2011 elections were much improved from the 2007, or 2003 votes, but that more work still needs to be done before they could be considered completely free and fair. El-Rufai continued by calling for even more electoral reforms, specifically electronic balloting and a centralized vote tally location, which would eliminate much of the human element of vote counting and transportation -- thus protecting every Nigerian’s vote.
Other key speakers included Ambassador Jendayi Frazer of Carnegie Mellon and former Assistant Secretary of State for Africa, who gave introductory remarks; Dr. Gwendolyn Mikell, Professor of Anthropology and Foreign Service at Georgetown University and Dr. J. Peter Pham of the Atlantic Council, both who served as official observers of the Nigerian elections; and, Mr. Reno Omokri, Founder, Build Up Nigeria Project, a non-governmental organization focused on youth. The event was moderated by Ambassador Robin R. Sanders, International Affairs Advisor and Communication Outreach Director for Africare, representing Africare’s President Dr. Darius Mans.

Other key speakers included H.E. Adefuye, Ambassador of Nigeria to the United States, and Mr. Oronto Douglas, Senior Special Assistant to President-elect Jonathan whose contributions were also both informative and lively. Overall, panelists agreed that the recent political violence and bloodshed that has taken place since the elections is of grave concern and that all parties should seek peace and address any concerns through legal processes. Key take away points included the importance women played in the voting process as noted by Professor Mikell and the large number of youth who participated in the elections, as mentioned by Mr. Omokri. In addition, the panelists highlighted the importance of the upcoming April 26, 2011, gubernatorial elections and the need for those to not only be peaceful, but also further address some of the challenges that were seen in the April 9th and April 16th elections in order to make them even more transparent. Everyone agreed that Nigerian President-elect Goodluck Jonathan will need to work after the election season to ensure that all disparate groups in Nigeria feel that they have a role to play in nation-building in order to create an environment where the country can grow and prosper politically, socially, and economically.