FEEEDS Blogpost below was written prior to announcement February 15 by Nigeria's Independent Electoral Commission (INEC) to postpone the general elections until February 23, 2019 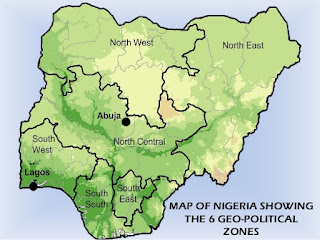 As Nigeria's 84 million registered voters prepare to go the polls in Nigeria's 36 states, in addition to the politics, desire for peaceful elections, and concerns about securing in certain areas of the country, there are some basic election factoids, that we need be aware of as Africa's most populous country begins 2019 election day in less than 24 hours from now.  Many of these voter and voting factoids will have an impact of vote count given that 2 of Nigeria's six regions have the largest number of registered voters.  Previous February 14, 2019, blog on Nigeria's election entitled Nigeria's Election & Beyond, " focused not only on the implications for this year's elections, but also the challenges and opportunities for Nigeria beyond the elections. In addition it is important to have a fuller picture of how regional populations and their respective registered voter numbers will both affect the dynamics and the outcome of this important election:


Some Quick Country Facts:
-- Population stats on Nigeria can be wide ranging, but no doubt it is the Africa Region's most populated nation with research numbers ranging from 190-195 million people in 2019.* Since Nigeria has not had an official census since 2006, for a number of political and ethnic reasons, the most recent research figures on the country falls within this range, although the 200 million figure was recently reported by media, but as of yet, no research source that supports that figure as of today (February 15, 2018);


-- Nigeria is politically and economically zoned into "Six Geo-Political Regions" - Northwest, Northeast, Southwest, Southeast, and South-South, and along with these is the Federal Capital Territory (FCT). These regional breakdowns are important because of where certain ethnic and political allegiances might lie and the respective size of their the regional populations. But in this election, this breakdown is even more important because it will be key to examine the following:  where the largest number of registered voters as well as the largest block of young people are; where the difficult human indicators (meaning poverty indicators) are; and, where and how these figures might effect the outcome of this election. President Buhari, of the All Peoples Congress Party (APC) is 76 years of age, and the main opposition presidential candidate Atiku Abubakar is 72. Their platforms to boost jobs, cut corruption, encourage foreign investment, address problems with infrastructure, power, energy, etc., and improve security are not that different from each other, although the former has a current record which can be examined, and the other a historical one from having served as the country's vice president from 1999-2007. Here are some answers to the above questions on why regional breakdowns are going to be key**:


Despite the large number of registered voters - some 84 million of which more than 42 million are between the ages of 18-35 years, and with the Independent Nigeria Election Commission (INEC) establishing 176,996 polling places (including for IDP's), the mood in the country among older voters appears to have turned more apathetic in the last six months, on top of some being worried about security in their areas, particularly in both the Northeast and Northwest regions, albeit, for different reasons. In the Northeast, it is gang and militia-related, and in the Northwest it is Boko Haram-connected. There are security concerns in the South-South and Southeast linked to various Niger Delta groups, or peri-groups, but not to the extent that security issues persist in the Northern areas. Voter turnout will be paramount, critically by young voters, as Nigerian election law calls for  a candidate to win at least 25 percent of votes cast in two-thirds of the states. Equally important, this will be a young voters election.


So where are most of these young voters concentrated? Yes, you guessed it  -- in the Northeast and Southwest -- where the largest number of registered voters exist.  This election -- despite the political rhetoric and platforms -- will come down to arithmetic and arithmetic by region based on the young voter, and young voter turnout. Whomever wins, will have won as a result of their turnout numbers, their desire to see their country move forward more  in every social, political, and economic aspect, and their reasoning as to which candidate can do it -- not only better, but faster.