Having served in the U.S. diplomatic corps during the tenure of Secretary Colin Powell, Ambassador Sanders' shares one of her remembrances of him in a television interview about the late General -- highlighting that he was not only one of the nation's top policy and strategic leaders, but leaves a legacy of kindness, thoughtfulness, and inclusiveness with his passing. Sanders also had the honor to be sworn into her first Ambassadorship,  to the Republic of Congo by the late Secretary, with the ceremony which also included Ambassador Andrew Young (see photos.
Ambassador Sanders was the first
woman and first African-American
to serve as U.S. Ambassador to
Republic of Congo, and later was
the first woman of any ethnic
background to serve as Ambassador 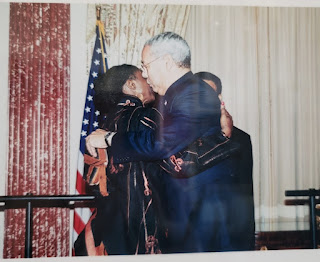