Nigeria's 2015 Presidential Elections: A Seismic Shift in the Political Landscape

Nigeria, over the last year, was known in the news for a few key things summed up in the sentence below:


Africa’s biggest economy and most populous country, plagued by corruption in many sectors, and facing major security challenges in its Northeastern region prosecuted by the terrorist group Boko Haram.
With its 2015 Presidential Election elections just completed, Nigeria's new summary headline for the foreseeable short term is:
A powerhouse nation that can hold credible, free and fair elections, (albeit isolated irregularities), leading to the over two million vote difference in favor of President-elect Muhammadu Buhari.

The tough-minded Buhari and his scholarly Vice President-elect, Professor Oluyemi Osinbajo, head the coalition-based opposition political party, All Progressive Congress Party (APC), which handily dethroned in the March28-29 elections, the country's ruling Peoples Democratic Party (PDP), which had been in power since the end of military rule in 1999.  Osinbajo is from the battleground Southwest region where the two candidates, Jonathan and Buhari, competed neck-and-neck. Buhari wholeheartedly took the North where he is viewed as the best answer to tackling the insecurity. Most election observers in the North or North Central walked away thinking Buhari likely had a victory. It was a tighter race in the Southwest and South-South Regions.
Nigeria held a democratic elections in a manner not known there before – an incumbent being soundly voted out of office, as descried by voters, for two key reasons:
-- The electorate's strong desire for change; and, for the defeat of the patronage-based PDP

Post-election atmosphere still remains calm. The pivotal role of technology, (albeit with problems) to combat fraud and the impact of the normal political shenanigans of financial influence peddling, for which Nigerian politics are known, aided this incredible paradigm shift and allowed for this seismic change in Nigerian politics.

﻿
Although per voter, there were a number of processing steps before one cast a ballot into three boxes(Presidential, Senatorial, and National Assembly), the sophistication of the Nigerian voter was clearly demonstrated, on top of their sheer patience. This is particularly noteworthy in rural areas as many stood in line for 12-15 hours in the sun with no food or water.  I saw this first hand; it was both astounding, and heartwarming to see democracy in action. During the vote count, as the sun was waning at polling stations, assembled voters counted ballots in roaring voices along with INEC officials. The entire event was a primer in voter education and mobilization. Last time I felt such was when Namibia got its independence in 1990.  Furthermore, the security services, which never get kudos, by most accounts, do so here, for their good conduct.
As an election observer listening to young Nigerian and women voters and what they wanted for their country -- a paradigm shift in leadership -- their goal in the end was met, soundly so.
Let's Not Forget: Jonathan's Moment﻿﻿﻿﻿﻿﻿﻿﻿﻿﻿﻿ 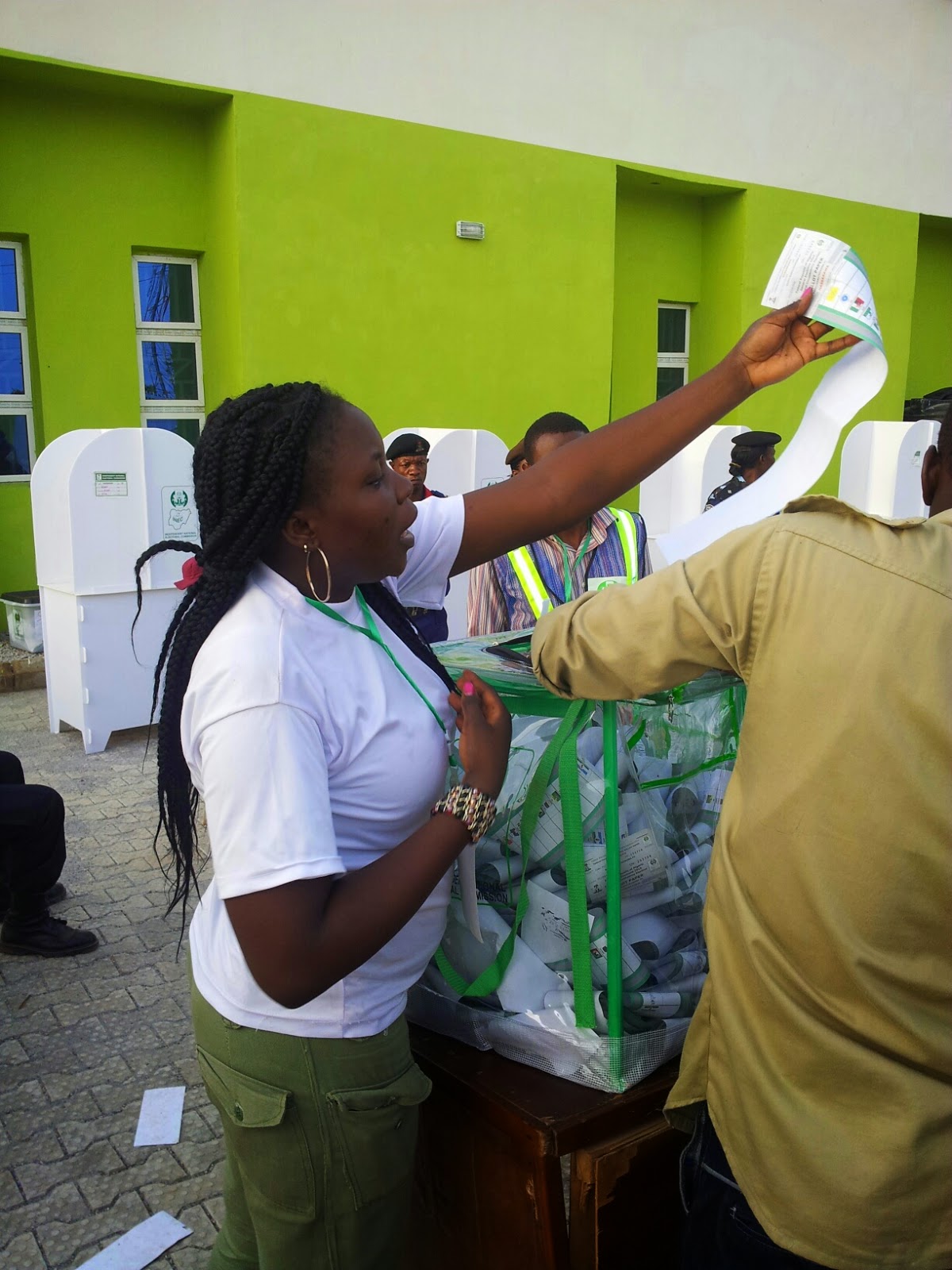 President Goodluck Jonathan made a pivotal contribution to the election process, and post-election peace when results were announced. Although encouraged by former Nigerian Presidents, Religious Leaders, and key Captains of Industry, President Jonathan, on March 31, 2015, did several magnanimous things also rarely seen in Africa politics:
These too are hallmarks of a democracy. By doing so, President Jonathan paved the way for another unusual thing on the Continent -- a peaceful transition of power, on May 29, 2015. The post-election atmosphere could have looked much, much different if he had not done these very democratic things. His actions too should be remembered; they were not small acts.


The Buhari Doctrine:
So what is next for the Continent's giant? Addressing the big insecurity challenges in the Northeast, corruption, sustainable energy needs, and poverty connected to the human indicators of education, health, food security, and job creation (formal or entrepreneurial), are the main stated governance pillars for the new Buhari Government. Buhari has good circle of immediate adviser around him, many whom I know, and has refashioned himself from his past into today's "democrat." One thing to watch is what happens during the honeymoon period, how long will that period be as expectations are high. This will be up the voters, but immediately successfully tackling Boko Haram (BH), and playing better with neighbors Niger, Chad, and Cameroon on the BH issue, will go a long way in solidifying the hope coming out of election. This includes determining, what to do with the 300 plus "reported" South African mercenaries in the Northeast; (continue to use/not use them in prosecuting the BH offensive).
On corruption, Buhari was always well known to be a staunch supporter of anti-corruption. The President-elect has always lived modestly, and carried himself equally so (have been to his home on a couple of occasions during my tenure as U.S. Ambassador to Nigeria; he also attended a meeting for Secretary Clinton at my U.S. residence in Abuja). As President (again), he will get another opportunity to tackle corruption. His tenacity in running three times for Presidency also reflects his doggedness and belief in his vision for the nation. He will need the continued support and patience of the voters, as well as assistance from the international community to address this endemic issue.
What's Next for Nigeria:
Having been in the pro-Nigeria corner, for many years, well before it was fashionable be there including saying "never count Nigerians out," in their ability to do what needs to be done such as hold credible, peaceful elections, the next step will be the solidification of this new found respect from doubters outside its shores. The coup de grace or determinant will be the sustainable results of the Buhari-Osinbajo Administration (political, security, economic, and social) that this hopeful nation is expecting, rather counting on, from this historical win. Buhari has everyone, including me, really routing for him to succeed.

Upcoming Gubernatorial Elections: Keep Focus
The upcoming gubernatorial elections on April 11, 2015, will be another opportunity for Nigeria to consolidate its democracy. For non-Nigeria watchers, these elections are equally as important. The Executive Governors of Nigeria control vast amount of financial resources and wield considerable influence. We should expect INEC to sort out the biometric and logistic glitches, and the security services to stay the course with good behavior. Voters, we hope, turnout with the same verve, commitment, and patience as before. Election observers should be as engaged as before, and voter mobilization will remain key.

When all of Nigeria's elections are over, and when its first opposition leader-turned president is sworn-in, Nigerians should be extremely proud of the example they have set for the Continent and evolving democracies around the world. They have redefined their future and the direction of their nation. I am extremely proud of Nigeria, proud to have represented the U.S. Government there, and honored to have served as an observer for this historic election. I wish the nation and the President-elect and his team the very best.
﻿﻿﻿﻿﻿﻿﻿﻿﻿﻿﻿﻿﻿﻿﻿
﻿