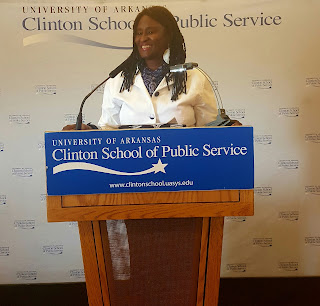 Little Rock, Arkansas - Ambassador Robin Renee Sanders keynoted a recent Clinton School of Public Service Policy Series event to highlight the importance of US-Africa Relations, particularly as a important friend and partner, as a region in which to build trade and business ties, as well as ally on efforts to counter terrorism. The audience included members of the public, Clinton School students, friends of the Clinton Library and former Clinton Administration employees and supporters. 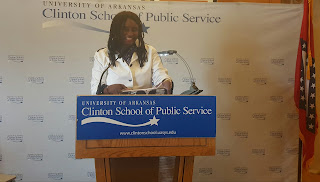 Following Dr. Sanders' speech, audience members asked a range of question about some of the positive areas she highlighted, including Nigeria's President Muhammadu Buhari is making on the issue. All of these efforts, were explained as being connected to assisting Africa in addressing the United Nations' Sustainable Development Goals (SDG's) to combat poverty to improve both the well-being and quality of life of the average African citizen; it was critical for the United States to help Africa nations achieve the SDG's.  She also noted that in a recent discussion she had with students from her alma mater, Robert Morris University, addressing global development trends, it was important to be aware of the role some of these poverty issues played in Africa with people being lured or forced into cyber security crime and terrorism.
that the Continent is making progress with many more nations becoming evolving democracies and underscoring the challenges with fighting corruption, but noting the international recognized efforts that

Ambassador Sanders' also noted that there has been some backsliding in some African countries on the democracy front given the trend by some leaders to change, usurp, or amend their country's constitution to remain in power (i.e. referring to DRC's Kabila, Rwanda's Kagame, and Uganda's Museveni -- all president trying to, had a role in, or have done so). In her view, Sanders highlighted that Africa's Small and Medium Size Enterprises (SMEs) are one of the bright lights on the Continent as they find "work around solutions" to many of the Continent's economic development issues, and are helping address unemployment through job creation, and developing solution-oriented "apps" in key sectors like agriculture and health.

There was also a book signing event of Ambassador Sanders' "Legendary Uli Women of Nigeria," book focused on the importance of "communication expressions," of endangered sign and symbols systems, such as Nigeria's "Uli."

In addition to the speaking event, Sanders received a VIP tour of the Clinton Library and residence, where at the former, she was able to view events she had worked on when she was Director for Africa at the National Security Council at the White House, especially her efforts on Clinton's first Africa trip, including the historic stop in Ghana (below left); and, Clinton signing the first Africa Growth and Opportunity Act in the White House Rose Garden. Ambassador Sanders also presented to her Clinton Foundation host a copy of the book she had complied while at the National Security Council (below center) on former President's Clinton Africa Initiatives for the Clinton Library. 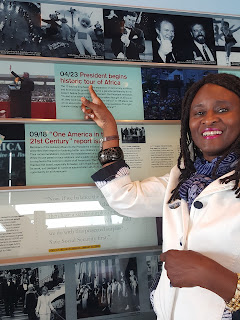 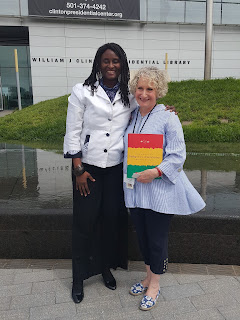 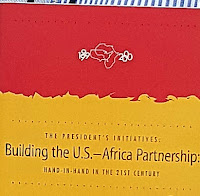