Washington D.C. - Ambassador Sanders was the recent keynote speaker for Pittsburgh's Robert Morris University (RMU) National Security Seminar, which is part of the school's goal to provide its students with an opportunity to interact with national security subject matter experts in Washington, D.C. The seminar, held annually at The Washington Center, focuses particularly on current cyber security issues for its students, faculty and other guests who are part of, or connected to, the School of Communications and Information Systems. 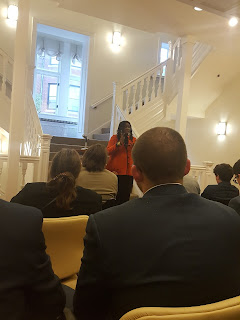 RMU, which is dedicated to ensuring its students have a global engagement awareness, invited Sanders, an alumnae of the University's doctoral program in information systems and communications, to provide her thought-leadership on the issue of cyber security and global development trends. Ambassador Sanders discussed with students the key global development issues she saw, which had linkages to many people (certainly not all) being lured or forced into cyber security crimes, or participation in terrorist activities because of their dire economic circumstances or human condition. This, of course, excludes those who were and would be criminals or involved in terrorism no matter what. She noted, as an example, Nigeria's Boko Haram forcing many of its captives, particularly girls and young women, into acts of terrorism such as suicide bombings. 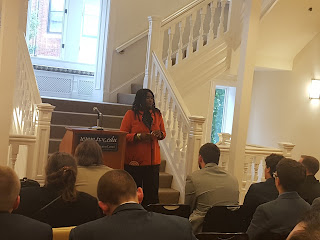 Some of the global poverty issues highlighted in the discussion included terrorists using the Syrian refugee flux to Europe as a gateway to enter France and Belgium recently to execute terrorist attacks, and the long-term planning (at least two years) for the terrorist attacks in San Bernardino, California last year executed by an American and his Pakistan-born wife. Investigators are considering now if from the onset, the wife was possibly a terrorist sleeper-cell operative for the Islamic State. In all cases, the use of cyber and mobile platforms played a significant role. Possible other additional gateways for terrorists to use could also be the migrant flux from Libya as well as the new migrant and refugee gateway which has now opened from Alexandria, Egypt to southern Europe, Sanders also highlighted.

Dr. Sanders, having just returned from Indonesia and Russia, noted that the U.S. needed to better help and assist friendly-partner developing nations, as well as some developed nations, with improving their security infrastructure and interagency coordination and cooperation, as well as try to be more than several steps ahead of countries the U.S. currently does not have a good relationship with such as Russia, or "frenemy" countries such as China.

Ambassador Sanders was introduced at the event by the Dean of the School of Communications and Information Systems, AnnMarie LeBlanc.