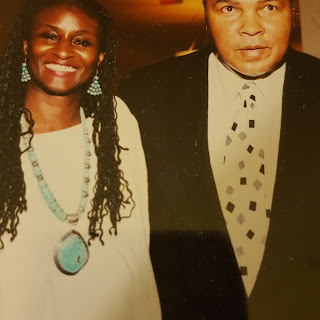 This was an incredible human being and role model for people of all nations and colors.One of the most interesting comments I heard today (June 4) was the unwritten impact that Ali had on today's American history just by virtue of changing his name. And, that name change by a person of his caliber likely set the stage in many ways for the mostly accepting manner in which enough Americans supported electing a President with the name Barrack Obama. Of course there were and remain outlyers who never were comfortable with either, but the majority elected not only this President twice, but the majority also revered Ali. These are the types of things in life that gives me hope and comfort in today's very dived America.

I had the rare priviledge to meet and talk to #The Greatest only once in my life time as a young diplomat at an gala event in Washington, D.C. (see photo). I had attended an event staffing another great #Ambassador Andrew Young, and was given the priviledge to walk Mr. Ali out as he left the stage. Ambassador Young took this photo and made sure I received it. (A thing I learned from Ambassador Young  that day was to always be able to take your own photos, which I have done ever since).

I always had in my Embassy offices overseas as I moved up the ranks in the US Diplomatic Corp, this photo with Ali, along with two photos of Ambassador Young swearing me in twice to serve as US Ambassador (Nigeria and Congo), and the photo of me talking to Nelson Mandela at his first #African Union meeting in Senegal following his release from Robbin Island. These four photos always had "pride of place" in my offices.

May the Great Mohammed Ali rest in peace as we know he will be the "Greatest" whereever his spirit is today and always.
Posted by Dr. Robin R. Sanders at 7:55 PM